What's In Your Glass?

You're out on the town with friends when suddenly you feel a lot more intoxicated than you think you should. You become dizzy and weak and attempt to gather your composure and make your way to the nearest restroom. Your vision becomes blurred and you suspect that something is terribly wrong.

It happens more than one might expect; a person drugging a drink for a sexual assault, embarrassment, and even robbery.

Popular ‘Date Rape’ drugs like GHB, and Ketamine are odorless and tasteless allowing perpetrators the ability to slip them into the victims drink unknowingly. The victim often appears and acts normal but later has no recollection of the events that took place under sedation.  These drugs were virtually undetectable until now.

Our revolutionary coasters give the user the ability to test their drink for hidden substances commonly found in drug-facilitated crimes. Simply take a sample of the drink in question with a straw or drink stirrer and place the sample onto test pads A and B. If either pad turns to blue, the test indicates the possible presence of a hidden substance alerting the user to seek safety and proceed with caution. Each test kit has the ability to detect the two most common forms of drugs found in drug-facilitated crimes,  Gamma-Hydroxybutyrate (GHB) and Ketamine.

These groundbreaking test kits are popular with concerned parents, night club owners and reputable bartenders around the globe. Click the shop now button to order yours today.

*25% of people’s drinks that are spiked will be sexually assaulted.

*1-4 College students will be a victim of a drug facilitated crime their first or second year attending college.

*In nearly all cases the victim stepped away from their drink for a short period of time before coming back to their drink and experiencing a rapid onset of intoxication.

5 Things you can do to stay safe:

1. Avoid accepting drinks from strangers or people that are overly friendly.

2. Be accountable for friends and watch out for each other when partying.

3. Plan for a safe ride home, use a ride share services or a cab if you find yourself stuck somewhere.  Its always a good idea to carry enough cash for a cab ride home.

4. Be aware of your surroundings and stay alert. Drink spikings can take place in an instant so try to keep your drink in front of you at all times.

5. Never leave your drink unattended and come back. This is the number one reason people encounter unwanted substances.  Finish your drink before you get up or order a new one when you return. 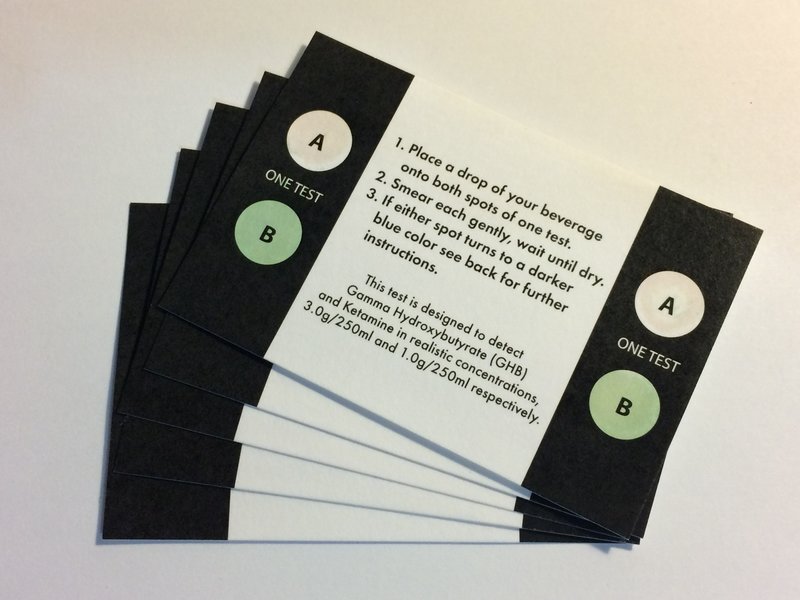 · Each strip has 2 tests (testing 2 separate drinks), one on each side of the card.

· Perform the test in a well lit area.

· It takes the activation of both test spots in one test character to test the beverage in question in accordance with this product.

· Make sure both test spots are dry, and free of condensation from the drink container.

· Place drops of the beverage to be tested onto each spot using a straw or drink stirrer.

· Rub gently. Do not mix the chemicals from each spot together. They should remain separated for best results.

· Wait until dry. The test can take a few minutes to dry and get a result, be patient.

If either spot turns to a DARKER BLUE COLOR, the coaster has detected the possible presence of a date rape drug alerting the user to get to a safe place.

Our products give you the opportunity to be sure your drink is safe by using drink safe technology.  Designed by a drug testing company, our revolutionary coasters are the trusted source for concerned parents, bars, nightclubs and universities across the globe.